By now, Theo Walcott should be one of the first names on the team sheet for club and country. The fact that he isn’t, for either, should ensure that debate regarding his past, present and future continues to rage. 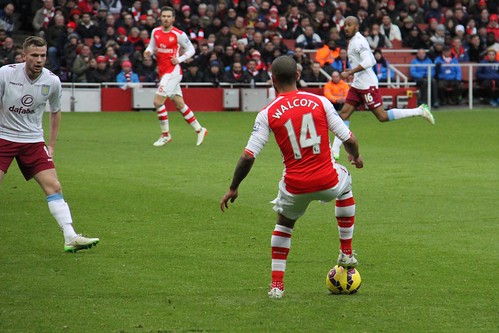 The former boy wonder is now 26 years of age, with ‘potential’ and ‘promise’ no longer words that can follow his name in a sentence regarding one of English football’s most talked-about performers of the past 10 years.

From bursting onto the scene at Southampton to being named in England’s 2006 World Cup squad at the age of 17, moving to Arsenal and countless spells on the treatment table, Walcott’s every move has been dissected in minute detail.

He will have grown accustomed to that by now, but the level of scrutiny has been ramped up over recent months.

Back in 2006, he was expected to trade clubs at some stage, with the general consensus being that he had – despite his age – outgrown his surroundings on the South Coast, with such talent deserving of a Premier League stage.

This time around, with transfer talk building again, there is a slightly more uncomfortable feel to the exit gossip.

It is, however, completely understandable.

Walcott, for all of his critics, remains a fine footballer. He is one of the most dangerous in the country on his day and a performer who should be approaching his peak, rather than being already past it and written off as a spent force.

He has, unquestionably, spent far too much time on the sidelines during his time with the Gunners, but he still possesses two of the most sought-after qualities in the modern game – blistering pace and a keen eye for goal.

Injury struggles, unlike the Michael Owens of this world before him, do not appear to have had a terminal impact on his game, but you get the feeling that he is pushing his luck and cannot afford many more trips to the doctor.

It could be that a change of scenery will do him the world of good – particularly if he can sign off by helping Arsenal (1/3 in the FA Cup betting ahead of facing Aston Villa at Wembley) in a successful defence of that trophy. There are no shortage of suitors who are willing to take an expensive gamble on turning him into the player who many believe he should already be – with Liverpool widely reported to be leading that particular chase.

Would Arsenal be taking a risk, though, in parting with his services?

There has been talk of contract extension discussions, of failed meetings and reluctance on both sides to compromise.

If commitment is to be made, then it needs to be made soon. Walcott’s current deal is due to expire in the summer of 2016, so Arsene Wenger needs to decide whether he cashes in this summer – while still having a saleable asset on his hands – or back the judgement which drew him to the jet-heeled forward in the first place and fight for fresh terms.

There are pros and cons to be considered, as many questions as there are answers, but only one that really seems to matter: Theo Walcott – deal or no deal?

New lease of life for Mesut Özil under Mikel Arteta

You can find out more about which cookies we are using or switch them off in settings.

This website uses cookies so that we can provide you with the best user experience possible. Cookie information is stored in your browser and performs functions such as recognising you when you return to our website and helping our team to understand which sections of the website you find most interesting and useful.

Strictly Necessary Cookie should be enabled at all times so that we can save your preferences for cookie settings.

If you disable this cookie, we will not be able to save your preferences. This means that every time you visit this website you will need to enable or disable cookies again.